In this article, I will discuss how people perform data classification using Satori and explain why Satori is a great choice for you to manage all of your stored data types. Before we dive in, here is a quick summary video: One of the core principles of DataSecOps is prioritizing knowledge about the location of your sensitive data and then prioritizing resources for security and governance of that data. Another guiding principle is that continuous processes are always preferable over ad-hoc projects because data changes very often. Specifically, sensitive information tends to show up in unexpected places, and you do not want to face a Murphy’s law situation of having sensitive data appear in a new location right after you finished mapping your sensitive data.

This is where Satori comes in. At Satori, it was extremely important for us to design our product so that it continuously scans data as it is being accessed in real time. Let’s start by reviewing the flow of what is happening (with regards to data classification) when you use Satori:

As you can see in the chart above, when your users are going through Satori, it continuously analyzes the data that is sent by the users (i.e. queries or commands) as well as the data that is returned from the data stores (e.g. Snowflake, Redshift, or others) back to the user. If needed, Satori also applies other capabilities such as self-service access control. In addition to these extra capabilities, Satori scans the data which passes through to classify specific data types.

The main categories of data which Satori scans for are:

You can find our complete list of classification tags here.

Satori automatically updates the data types found in its inventory which provides you with up-to-date information about the locations and types of sensitive data in your organization.

In the screenshot below, you can see the Data Inventory that is generated automatically by Satori as data is being accessed: 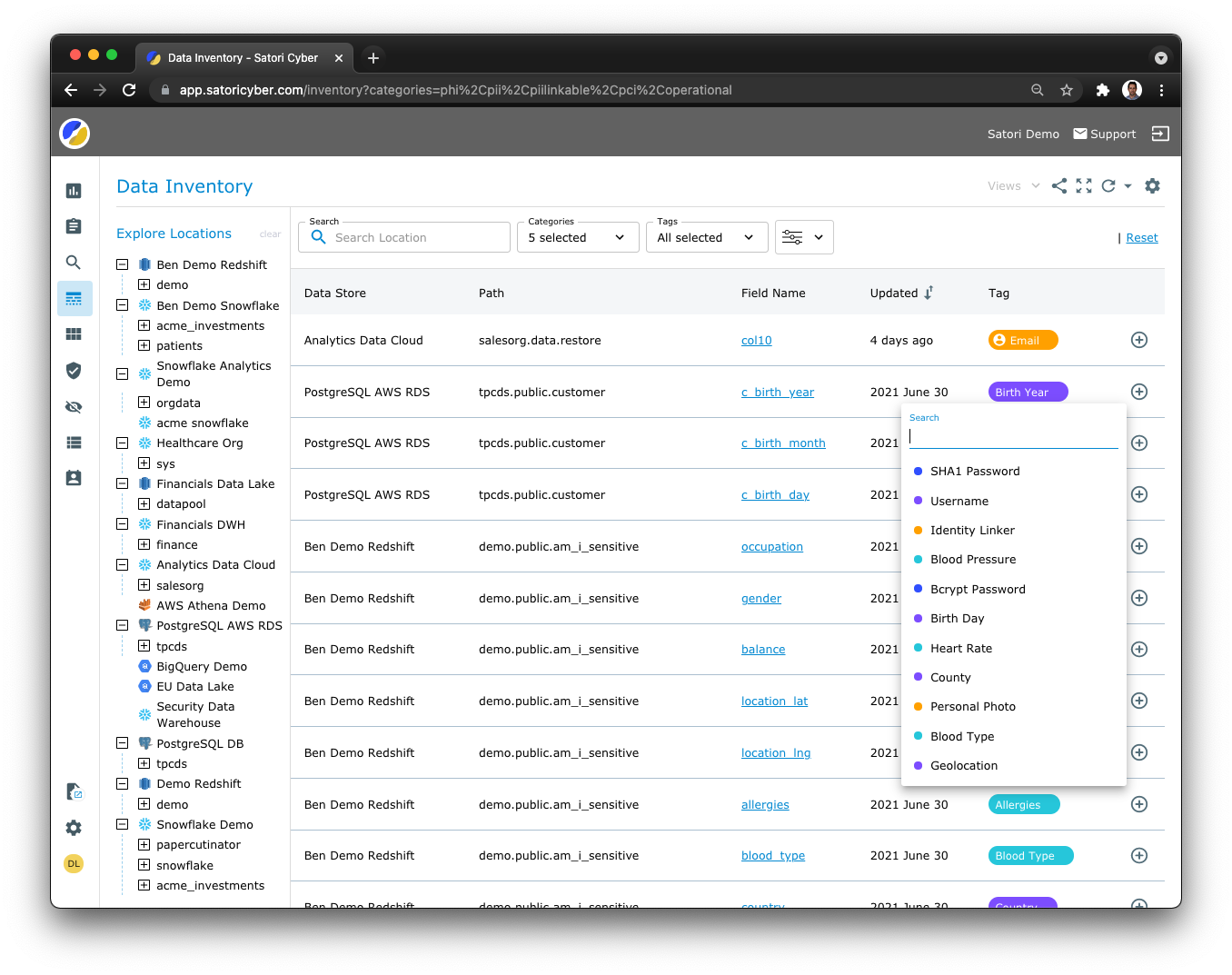 In the screenshot below, you can see an audit entry which contains the data classified: 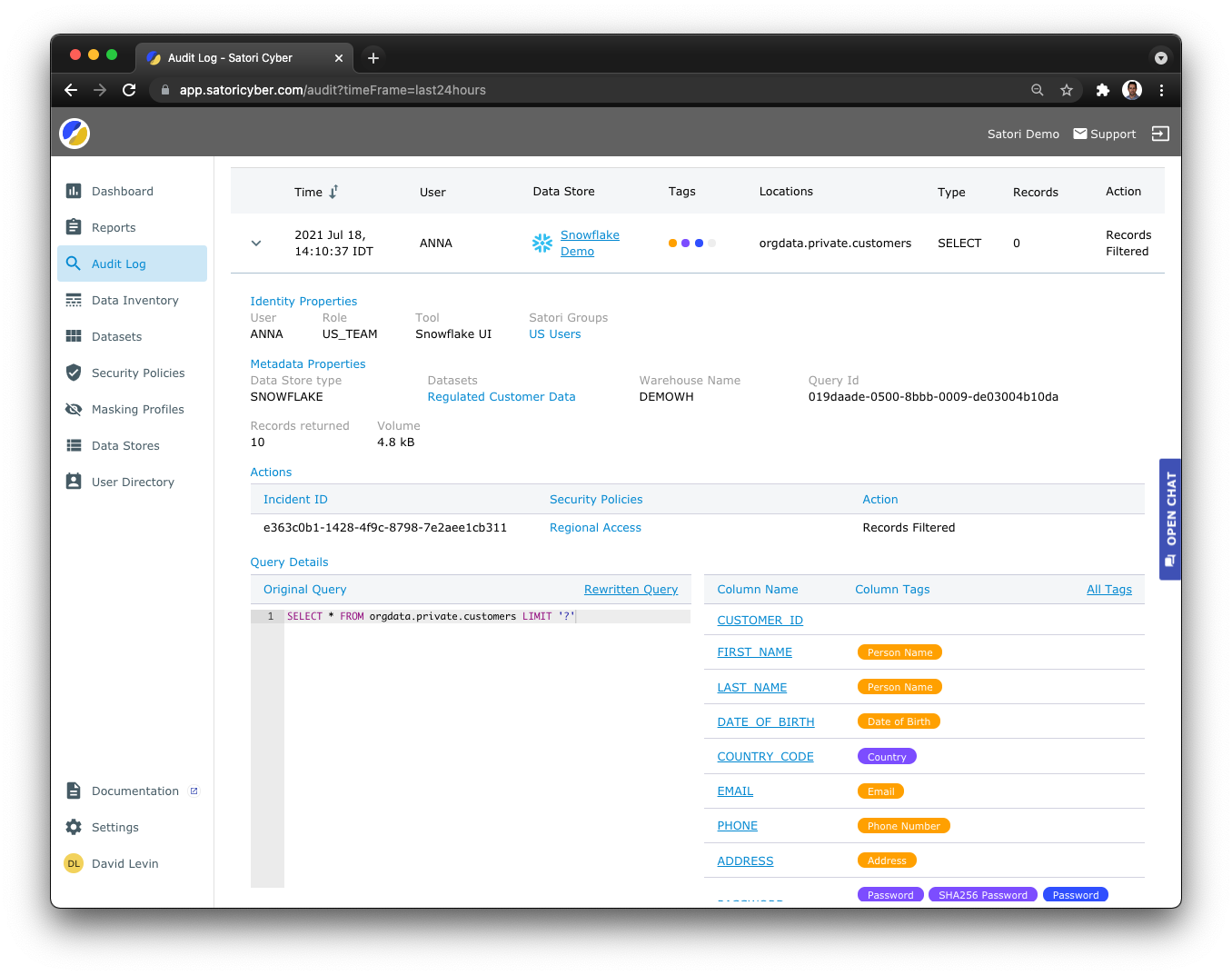 In the screenshot below, you can see a Satori dynamic masking definition, based on data types classified: 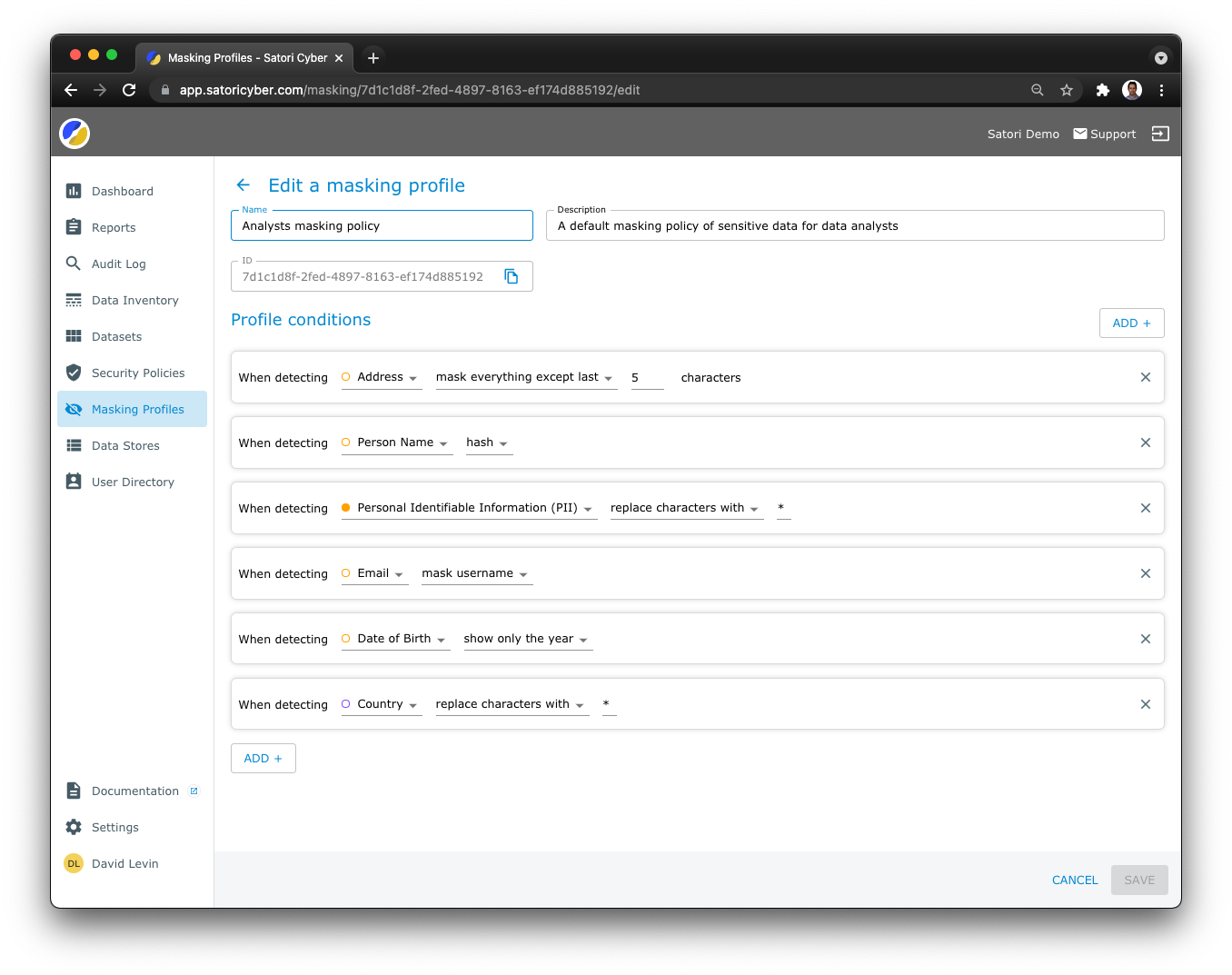 Semi-structured data is often either overlooked or classified uniformly as one chunk in many data classifications (e.g. a message containing 1,000 different values will be marked as ‘email’ solely because one of the values is an email address). This problem is further intensified, as semi-structured data is used quite often due to its flexibility and the fact that it requires less overhead when loading it into your favorite data store.

At Satori, we have designed our data classification system to be the most suitable for your data. This means that with Satori, you can also easily override any classifications. You can add specific classifications to locations (and you can even use our API to automate this process from other platforms you use), or you can remove classifications for irrelevant locations.

How Sensitive Data Is Discovered by Satori

Satori is a data access controller that does not change anything about the way your data users utilize the data (i.e. no changes in queries or commands) and does not change anything in the data stores themselves (i.e. no views or schemas created, Satori does not even a use a database user). Rather, Satori acts as a proxy between the data users and the data stores, and we only change the host to which the users are connected.

For some data types, we use dictionaries or lists of values, most often by incorporating additional logic to the classification. For example, if all “significant” values in a certain location called ‘state’ are US states, it probably means that the location holds specifically US states. However, if ‘state’ returns values such as ‘idle’, ‘ongoing’, and ‘completed’ it will not be classified as ‘US states’ but rather as ‘project states.’

Some data types are ideally identified by pattern matching. Some examples of this data include email addresses, which all follow a (somewhat complex) pattern. When classifying other data types, we often use pattern matching as part of the algorithm.

Some data types are discovered by applying certain algorithms. For example, credit card numbers are calculated (as part of the process) by applying the Luhn algorithm, which when used in a statistical manner (as we do), significantly reduces the chances of false-positive matching.

Some data types are best discovered by extracting certain features and then applying a trained machine learning algorithm to classify the data. An example of such data is loosely patterned data types such as street addresses.

What About Data That Is Not Accessed?

Though we believe that we can extract the most value from discovering sensitive data as it is being scanned, in some cases, our customers want to run a “full scan” on their repositories. In those cases, it is easy to run these full scans by retrieving a sample of data from your data stores.

An important part of what Satori does is continuously classifying data as it is being accessed in real-time. We believe that this is the best way to discover sensitive data for data that may change. If you would like to set up a demo, please fill out this form: