This is part of our complete Amazon Redshift Guide.

Redshift is the world’s most popular cloud data warehouse solution and is currently utilized by tens of thousands of organizations worldwide. It’s based on modified PostgreSQL and provided by AWS. Its access control can be broken down into the following three areas: This guide will cover the following: Read More:

Network access control in AWS Redshift is managed by the network infrastructure configuration in your AWS account. This is where you can set cluster connectivity, limitations within your VPC or whether it opens publicly or through a VPN. Redshift’s network configuration settings are more or less identical to access configuration of other AWS resources and will not be covered in this specific guide. Note that, when setting network access on Redshift, you’re setting your connectivity to the entire cluster. This will limit your options for more granular control, preventing you from allowing access to specific securable objects (databases, tables, views, columns or rows) or only granting certain IP addresses access to specific sensitive data.

You can either manage your users and groups within Redshift, or use AWS IAM users assigned via the connection string. The privileges to access specific objects (i.e. access to tables) are tightly coupled with the DB engine itself, and are configured via Redshift SQL commands. Groups can be viewed as roles and can therefore be assigned to users. A user inherits the privileges from the group (or groups) they belong to.This means that, if we have a sales group and a marketing group, we can assign salespeople to the sales group and marketing employees to the marketing group. We can then assign selected “power users” with access to both groups.

An example of setting group privileges in Redshift:

In the following example, we have a sales person (sales_person1), a marketing person (marketing_person_1) and a power user called marketing_and_sales. 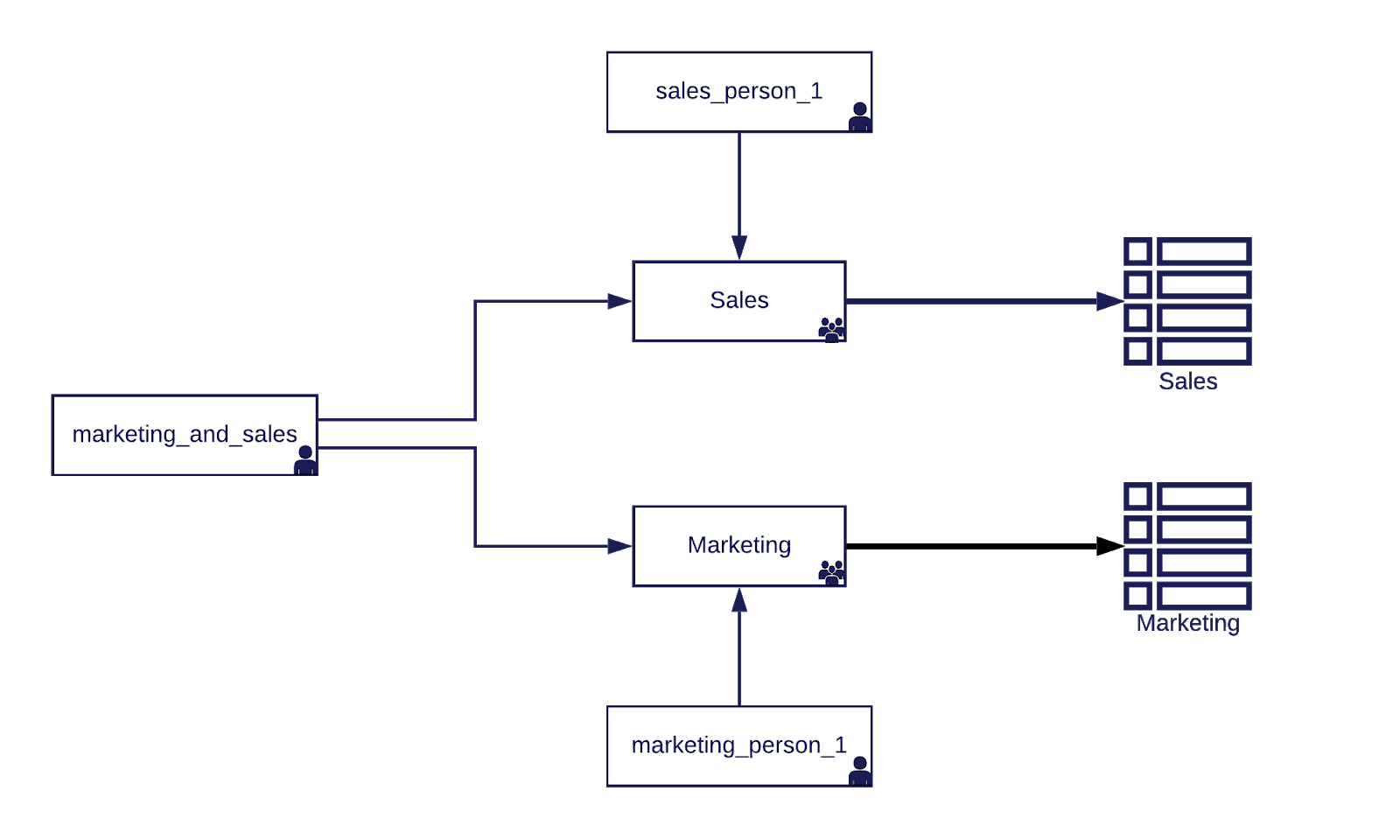 Using groups as roles in Redshift:

To view assigned roles to users in your Redshift cluster, you can use the following command:   This will give you the following settings, where you can see a user in each group as well as the ‘marketing_and_sales’ power user belonging to both groups:

There is no hierarchy in the privileges model, which means that you can’t set “sub-groups” that inherit privileges from other groups. Moreover, while users enjoy accumulated privileges according to their groups, you can’t choose which group to use for each query or session.   Learn more:

AWS Redshift offers fine-grained access control by allowing configuration of access controls to databases, tables and views, as well as to specific columns in tables. This can be set in the SELECT level (reading data), UPDATE level (updating data) or ALL (both). Let’s take a look at this feature in action. Let’s say that ACME international has a table called Orders, containing all of the details recorded for each order. The company has a shipping team, which currently has read-only access on this table (due to the decision that allowing them to update data could pose risks to ACME). Here’s how we set up this example in Redshift: Note: using xyzzy-1-XYZZY as your password is obviously not recommended. Following an audit performed by the privacy officer, it was found that the order details contained PCI (Payment Card Information), which should not be available to the shipping team. In Redshift, we can now allow access to the rest of the data, except for the payer_creditcard, payer_expmonth, payer_expyear columns.

How to set column level security in Redshift:

Row level security means that, in a certain table, certain users can only access specific rows. These rows should have criteria (usually based on the value of one of the columns) that define which role can access the specific item (row). In certain cases, this additionally requires a translation or lookup table to define relations between roles and the type of items they can access within the specific table. Setting up row level access control in Redshift is rather complicated, but not impossible. Let’s take a look at this proof of concept: In this example, we have a table called department_employees, which contains details about the employees in each department. Let’s create the table and populate it with employees from our sales & marketing teams:   Now, let’s imagine that we just got a directive that only accountants specific to the specific groups will be able to see employee details. In this example, only accountants with the group ‘marketing’ will be able to see Marky McMarket & Sir Market-A-Lot’s details. Our initial instinct may be to implement this by checking the CURRENT_USER_ID (or CURRENT_USER) of the connected user and match it with the users & groups information from pg_user & pg_group. Unfortunately, in Redshift, it is not possible to mix this information (from leader node) with the query to the entire cluster. Instead, consider adding a table mapping each user to their respective roles:   Now that we have the table and the user, we create a view, which will pull information from the department_employees, filtered according to users_to_groups, and grant SELECT privilege to the user marketing_accountant:   After doing this, we now get a filtered view of only the items we should see:

While simplified, this implementation works. When testing, it is best to use the User ID instead of User Name for performance reasons. However, you can also enforce the same logic via a UDF (User Defined Function) to incorporate in the views or use a BI tool, such as quicksight, to enforce row level security. The latter will limit you to the data you query through that BI overlay.   Learn more:

Logging failed and successful access attempts to Redshift data warehouses can be achieved by either using the system table STL_CONNECTION_LOG or by enabling audit logs (which are kept in S3 buckets). Note that the audit logs are not enabled by default, meaning that you will need to manually enable them.

How to set up audit logs for AWS redshift

This explanation will focus on setting up audit logs from the AWS console. You can also do this by using AWS API or CLI. Note that keeping audit logs, especially activity monitoring for data warehouses with a lot of activity, may incur high costs. It is important to take this into account prior to enabling audit logs. To enable audit logs, edit the Audit logging section under ‘Maintenance and monitoring’ in the cluster configuration:

Inside, configure the S3 bucket definitions. For example: 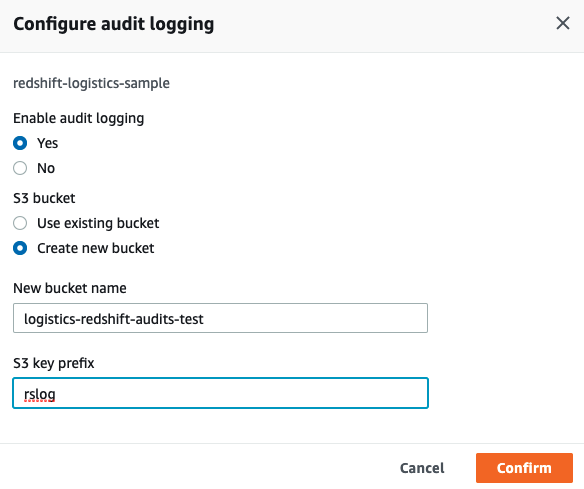 If you would also like to log user activity (queries running against the data warehouse), you must enable activity monitoring, too. This will add a significant amount of logs to your logging S3 bucket.

Step 1: create a new parameter group in your Redshift cluster. 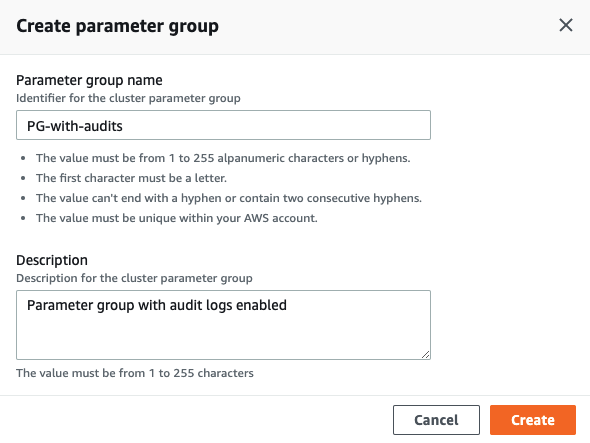 Once the new parameter group is created, edit the parameters and set enable_user_activity_logging to true: 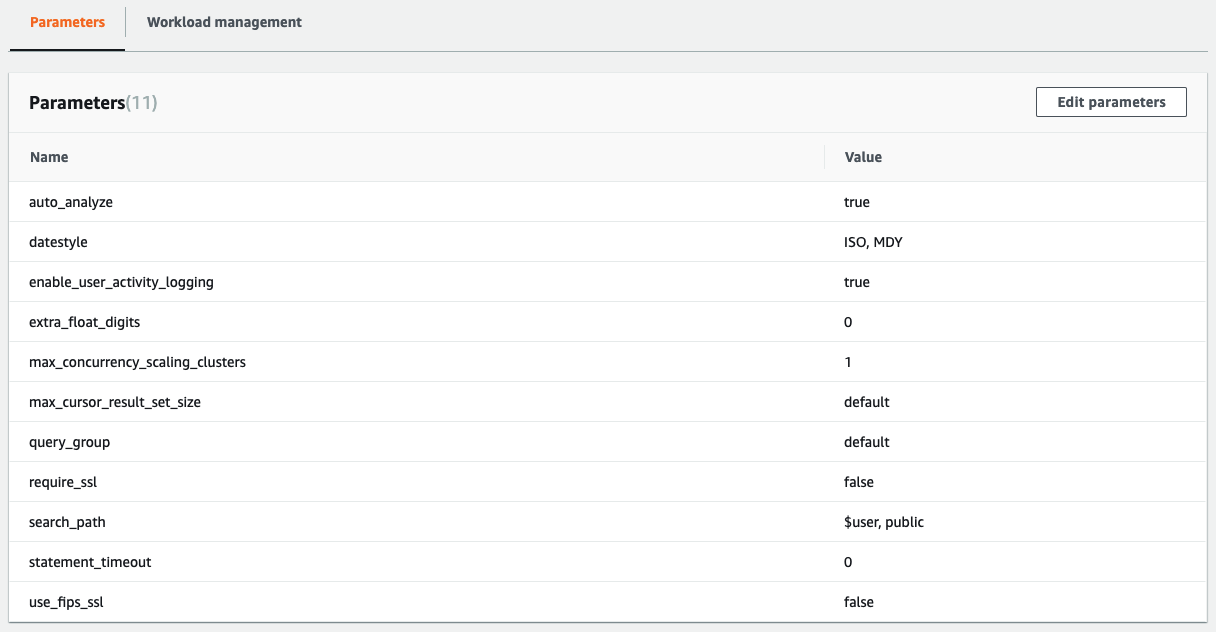 When using the system tables, consider that AWS claims that retention time is only two to five days (though in a test cluster, we’ve seen log records of about seven days). Such a short retention span is useful for troubleshooting, but not for tracking behavior over a long period of time or performing incident response for incidents that elapsed outside of the retained time frame. On the other hand, when enabling audit logs, the logs are kept indefinitely, unless you set a S3 lifecycle setting on that bucket or perform an ETL operation to purge and compact your data. Purging the data may be necessary if you only want to access data for specific use-cases. Compacting it means removing access logs which you will probably not need, such as connections by the rdsdb user used by AWS for maintenance. It is also important to note that, since system tables are kept on the cluster nodes and audit logs are saved separately from the Redshift cluster itself (in S3 buckets), access to the audit logs can be achieved separately from the Redshift access (i.e. allowing the security team access to the S3 buckets without having to give them access to the Redshift data warehouse itself). Here are some fun examples of querying access logs for useful information:

How to look specifically for failed logins?

Showing a list of the connection drivers used by the redshift users:

By analyzing this information, you may get indications of anomalous behavior by clients, or usage of tools you do not want users to use. Note that this information is only available for successfully authenticated users.   Learn more:

Prior to setting such access controls, you will be able to see queries pulling data from these resources by querying STL_QUERY, as seen below: Retrieving queries access to specific objects in Redshift:   However, In AWS Redshift, there is no failed SQL queries log. Therefore, if you do not allow access to specific securable objects, you will not be able to get visibility into access attempts to those objects. This may be viewed as a weak audit trail, given that you do not need to audit cases where users attempt to execute forbidden queries or actions.

While you can configure users and groups within AWS Redshift itself, it does not scale well for large organisations. That is true for other data warehouses as well, as managing your identities in a centralised location reduces overhead and risks. Redshift integrates with identity providers such as ADFS or Okta (or any other IDP that supports SAML 2.0 or OIDC. Once integrated, Redshift obtains the users and groups settings from the IDP, and you can set the privileges for the appropriate groups (and if needed also users) via the GRANT command, as described above. Read More:

AWS Redshift provides a helpful set of tools for controlling access and securing your data warehouse clusters. For some use-cases, such as those requiring granular or dynamic access controls, it is challenging to achieve business objectives with Redshift alone. This is where Satori is happy to step in and help.

Satori can help you achieve significantly more granular network-based access control when deployed in front of a Redshift data warehouse. For example, using Satori, you can allow global access to your Redshift data warehouse while prohibiting access to specific resources (databases, schemas, tables, rows or columns) outside of a certain set of IP addresses.

When deploying Satori in front of a Redshift environment, you can create column, row and cell-based granular access controls tied to business rules instead of securable objects. This enables easy maintenance of such policies and a gradual roll-out process (beginning with alert-only for a subset of your data consumers). You can also achieve easy visibility into the existing data access patterns and violations on the Satori dashboard. In addition, you can set fine-grained access control according to classified data types, instead of database objects.

Satori keeps track of logins and sessions to Satori-protected Redshift environments, enabling security policies to handle such violations as well as enhanced visibility into suspicious incidents.

By using Satori, access control violations (whether in “alert” mode or blocked) are logged without limitations. We also remove the need to worry about extracting raw data from S3 buckets by transforming and loading it into a separate data store you can query at your leisure. This allows security teams to gain full visibility into past violations and take appropriate action.     Learn more:
Learn More About Satori
in a Live Demo
Book A Demo
About the author
Ben Herzberg
|Chief Scientist