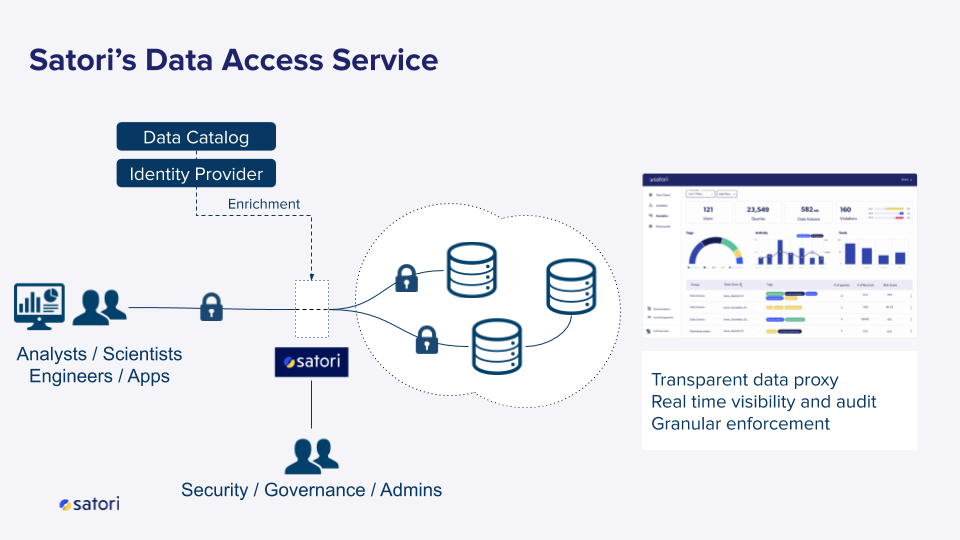 At its core, the Satori architecture is a transparent proxy service to which data consumers connect rather than connecting to the data store itself. Satori is not a query engine, a proprietary API, or an alternative DB driver, but rather it is a security layer that organizations deploy on top of their data stores in a transparent and noninvasive manner. Satori operates at the network level but speaks the data store’s language, allowing it to deliver a rich set of capabilities without changing the configuration of any data sources.

Since Satori is transparent for its data users, it does not require making any changes to business intelligence (BI) or analytics tools, so data analysts and scientists are able to continue utilizing data in the exact same manner. Since Satori is also transparent to data stores, the mechanisms of authentication, authorization and auditing remain unchanged. The Satori component that enables this access control flexibility is known as a DAC, or Data Access Controller. For those with a background in application delivery (such as myself) this component may remind you of  an ADC, or Application Delivery Controller, which is essentially a fancy name for an application layer load balancer. Indeed, we did borrow successful concepts from the ADC architecture in order to design a modern data access layer. To put this concept in simple terms, in the same way that one configures ACLs (Access Control List) that apply to all applications in their LB (Load Balancer), Satori users can configure access policies that apply to all data locations by using a DAC.

Satori’s engine is deployed in the DAC. DACs can be consumed as a service, or they can be customer hosted. DACs autoscale to support any number of users and data stores, and customers can use as many DACs as they need based on their data stores footprint and the distribution between various public clouds and regions.

For enterprises who wish to completely offload any operational overhead of hosting a DAC, Satori provides a DAC-as-a-service deployment option. Organizations do not need to manage compute, storage, software upgrades or patching—Satori handles all of these aspects. Organizations use a DAC in the same public cloud region as the data store, so the data never leaves the region. DAC-as-a-service supports any type of data store, IaaS, PaaS, and DBaaS.

For organizations that seek to own all aspects of data operations and require that data remain within their VPC, Satori provides a customer-hosted DAC. Customer-hosted DACs are identical to SaaS DACs except that they require a one-time deployment and the management of the underlying infrastructure. Software updates are periodic, and we use helm-chart-based deployment on your on-prem Kubernetes cluster, so customers who choose the hosted DAC option can be confident that their Satori DAC is self-sufficient and that data never leaves their VPC.

To learn more about the different deployment options visit our documentation site.

Previous How to Complete a Safe and Simple Migration to Snowflake

Next How to Configure Satori With Azure Active Directory and Snowflake