By Ben Herzberg
|Chief Scientist
Row-level security, or row-based security, is a data access control concept in which access to data in a table is limited according to certain restrictions, and various users, groups or roles may have different permissions on certain rows, based on identities within the rows. Given the right conditions, row-based security can be an important form of data protection control. For more information about how Satori helps simplify row-level security for Snowflake and other data stores, read our post specific to that. Take for example a situation in which tables contain sales data for multiple regions or departments, and the organization wants to limit specific teams’ exposure to data about sales in other regions. Such a situation can be simplified by the following diagram which shows an access attempt from a user who “belongs” to region 2. Row-level access control should prevent this user from retrieving data from other regions while preserving her ability to query data about her own region. Today, we will learn how to implement Snowflake row-level access control, by using its built-in capabilities, as well as by using Satori along with Snowflake. 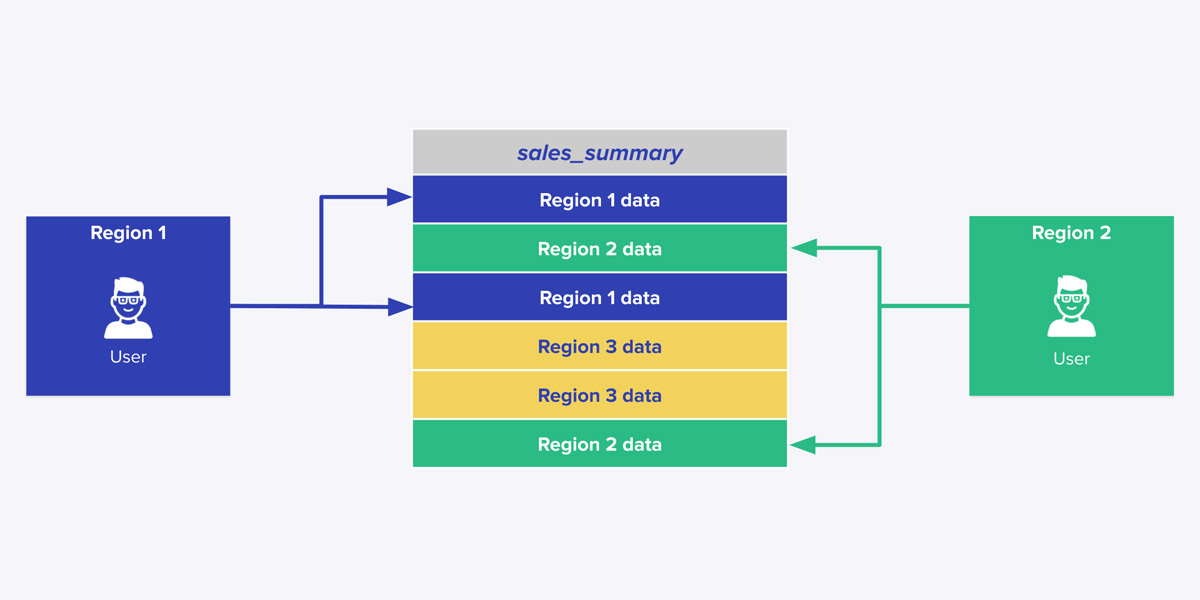 Row-based security includes some inherent challenges, and there is no silver bullet that solves everything. Rather there are a series of decisions that need to be made according to the reasons for enforcing row-level security and the risk calculations: To understand the example below, let’s create a sample table called sales_summary, holding fictitious sales data for different customers across different regions:

Explicit row-level security means that the users have to add specific filtering based on the row-level security criteria when they query the data. A region 2 user, for example, would have to add filtering for their specific region, as shown below: The above specification would fail, though, giving an error that the user must filter the region_id column. Filtering by a region the user does not have access to will also fail and give an error: Only a query that filters the table according to the user’s allowed regions should work, as shown in the below example: This process may get a bit more complicated, as users may have access to several regions. In this case, users should be able to filter by any region they have access to.   Learn more:

Implementing an implicit row-level security system limits the results a user receives from the database according to certain access control settings. In this case, the user will query the table without placing any filtering over the region_id column, but the filtering will then be added, either by an abstraction layer of a secure view or by query rewriting. As per our example, we can create a table containing the row-level security definitions per role as well as a secure view, abstracting data access to the sales_summary table. Let’s create an example of implementing such controls:

Step 1: Create a Row-Level Security Configuration Table   As you can see in this sample, we are creating a table that will contain the mapping of roles to regions and answer the question, “Which region can each role view?” Step 2: Create the Abstract Secure Views in Snowflake   As shown above, this view gets the original columns from the sales_summary table, but it enforces a filter that selects the region which is configured for the querying user’s current role (using the CURRENT_ROLE() function). Step 3: Granting Permissions In this step, we are creating the “region2” role, assigning it to the “region 2” users, and granting the role with access to the view we created, as well as to the mapping table (rows_filtering_by_regions). Note that we do not grant permission to view the underlying table (sales_summary), as it contains no restrictions over which rows are being queried. Now, when we use the role “region2”, we only obtain results for region_id 2: This is the information that is returned:

If the requirement is to allow access based on multiple roles (in our case each role adds one or more “regions” which we will be able to view), we can do so by using the CURRENT_AVAILABLE_ROLES() function, which (as its name implies) returns a JSON array of all available roles to the current user. Let’s modify our code accordingly:

Step 2: Replace the Snowflake Secure Views with a Multi-Condition Query As you can see, the “magic” is that, instead of checking for a match for our current role, we look for any matches for any roles the user is granted. In addition, this code allows multiple roles to be tested against each other.

Snowflake introduced a new implementation of row-level security, which enables a more simple and reusable way of handling row-level security. Row access policies are created once, and can be then applied on one or more tables or views. In this case, the policy defines the filtering to apply, so that users are getting rows from the table based on specific conditions. For example, let’s assume that we want to allow access to the raw sales data based on the regional entitlement of the roles. Let’s create a mock raw sales data on which we will apply the policy, and a mapping table, mapping the entitlement of the different regions to the roles. First, let’s create the mock data: Now, let’s create the row access policy, which defines that if the requesting role is SALES_ADMIN, they will see all sales, regardless of region. However, other roles will be looked up in the mapping table, to check if the current role can view data from the specific region: Now what we do is apply the regional_access policy on the region column of sales_raw. This flexibility of applying the policy on a specific column (or columns) can help when in another table that column may be called item_region or customer_region instead of the region. Here is the assignment command: Snowflake Row Access Policies can also be applied on external tables, which can make secure data access faster, as it may reduce or eliminate ETLs needed to be done on such data. In addition, you can set both Row Access Policies and Dynamic Masking on the same table. Another thing to note is that Row Access Policies (unlike secure views) also work when deleting or updating data.

Satori can be used to set up granular policy controls in order to simplify data access. This process can be performed on top of a single Snowflake data warehouse or on top of your entire data stack. Either way, the basic concept is that the data processed by Satori is classified with Satori tags (such as PII, PCI, and more), as well as with custom tags. Setting up row-based security in Satori decouples security controls from the data infrastructure and enables policies not to require in-depth knowledge about the data itself. Such control can be set over all relevant tables and warehouses using one policy. This is an example of a real-life Satori row-based security policy companies apply for GDPR compliance. It verifies if the user is using the US_TEAM role, and, if they are, the policy checks if any customer data is retrieved (this is a tag that may be configured to include any data you would like to limit access to). In a case where the data is not filtered only for US customers, the request is blocked (action: block):

Learn more:
Learn More About Satori
in a Live Demo
Book A Demo
About the author
Ben Herzberg
|Chief Scientist

Uncategorized
Custom Classification: Common Use-Cases
In a previous post, we introduced you to our data classification capabilities. As a recap,...
By Ben Herzberg
Uncategorized
Applying DataSecOps Principles on MLOps
Machine learning has been commoditized in the last decade or so, and I love it....
By Ben Herzberg
Uncategorized
Introducing Satori’s Compliance and Security Kit
Today, we are announcing Satori’s Compliance and Security Kit, which enables companies to identify users...
By David Levin