To remain competitive organizations need to share data quickly and easily. While this data must move through the organization it is important to ensure that only those individuals who require access are granted access, this access is limited to only the information required, and access is revoked when no longer necessary; also known as just-in-time (JIT) access controls. JIT access controls are necessary to reduce the risk exposure of a data breach, a costly occurrence, while also enabling maximum productivity.

Let’s explore how integrating Jira with Satori enables the sharing of data by automating the granting and revoking of access to data.

Atlassian Jira was initially designed to track bugs and issues; however, it evolved to become a software development tool for agile teams. It is used in a variety of circumstances, from software development to agile project management. It helps plan, track, and discuss work objectives. Jira is also used to quickly and easily optimize workflows.

In this particular example, we explore how Jira can provide a customizable workflow for granting and revoking access with Satori.

The integration of Jira with Satori enables users to automate the granting and revoking of access to data. In our recent State of DataSecOps report we found that approximately 60% of respondents still rely on manual processes to grant and revoke data access.

Automating this process reduces human error and speeds up the sharing of data. Some of the benefits of integrating Jira with Satori include the following:

Read more about Access Control: The Dementor of Data Engineering and the Benefits of a Consolidated Data Access Platform.

Before getting started with this example there are a few requirements. 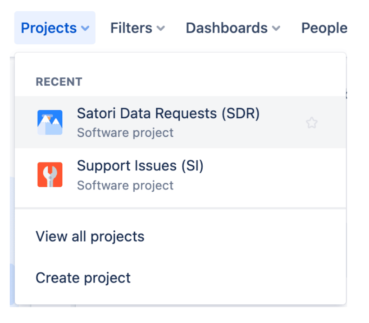 If you set this up and then try to create a new Satori Data Request record, the first part of the create screen might look like this:

To keep things simple in this example, we are going to use the Summary field as the name of our Satori Dataset.

When you scroll down in this create dialogue, you will see your new Satori Duration field. In this example the user has access to the data for 8 hours:

In Jira, navigate to System, then Global Automation

How you define the automation rule depends on your business process or workflow. This rule determines when a call is triggered to the Satori relay server code and Satori’s Rest API. There is no right answer here.

Your Jira implementation will differ from everyone else’s. In this example, we identify two easy choices.

a. Manually by User Action

b. When an Issue or Task Transitions to a New Status

In this example, we describe a solution using the issue transition approach. To keep things simple, we want to trigger this rule if the status of the Jira task changes to In Progress.

3. Move the Issue to In Progress Status

When the issue is In Progress a web request is sent to a Satori Rest API.

Next, we add a New Action:

And then we choose Send Web Request from the Notifications section of possible New Actions:

You should see something like the following (it is partially filled out, but still incomplete at this point):

This is a developer-led process and does require a solution specifically tailored to your environment.

Satori provides a getting-started wireframe relay server written in Python Flask to aid you in this process.

Once up and running, this relay server expects a specific URL from any external system e.g. JIRA:

If you have not made changes to our Sample Relay Server, then the Web Request URL should look like this:

The completed automation step for Send Web Request looks like this:

The relay server adds the current issue owner’s email to the access list for the requested Satori Dataset.

4. The Task is Moved to Status Done

When the data access task is moved to Done we need a second automation rule to remove the user.

In this example, we defined the criteria if the ticket moves from In Progress to any other status.

A second web request is sent that is almost identical to the Add User.

Although there are a few differences.

At the end of this Jira configuration, you have two automation rules to trigger Satori.

By creating a new Jira record type Data Access Request, you can envision linking these records to another Jira record type. Jira has strong support for linked records which allows for powerful workflow ideas.

To ensure that everything is working correctly and users are automatically added and removed, we run a quick test.

4. When you move this ticket from status Backlog to status In Progress, it will add the current Jira user to the list of access users for the Satori Dataset.

5. Back in Jira, when you change the status from In Progress to any other status, the user is then removed.

To learn more about Satori:

Ty Alevizos is a Principal Solution Architect at Satori Inc. He has 3 decades of experience in data-related fields, including database management, BI and visual analysis, data science principles, and organizational best practices around data topologies and data security. He graduated from U.C. Berkeley with a degree in music composition, and in his spare time plays jazz bass in Seattle and the Pacific Northwest region.