I love baking and take particular satisfaction out of leavening the dough. There’s something so exciting about returning to dough you’ve left to rise on its own and finding that it’s doubled in size! If only I could say the same for user privileges. While they too can bloat like dough, the outcome isn’t nearly as tasty — just risky.

Why do user privileges bloat?

Every organization delegates the role of assigning access privileges to at least one individual or team within the enterprise. It’s the responsibility of that person or team to process permission requests according to company policy and ultimately accept or reject them.

Granted vs Used Tables by Role 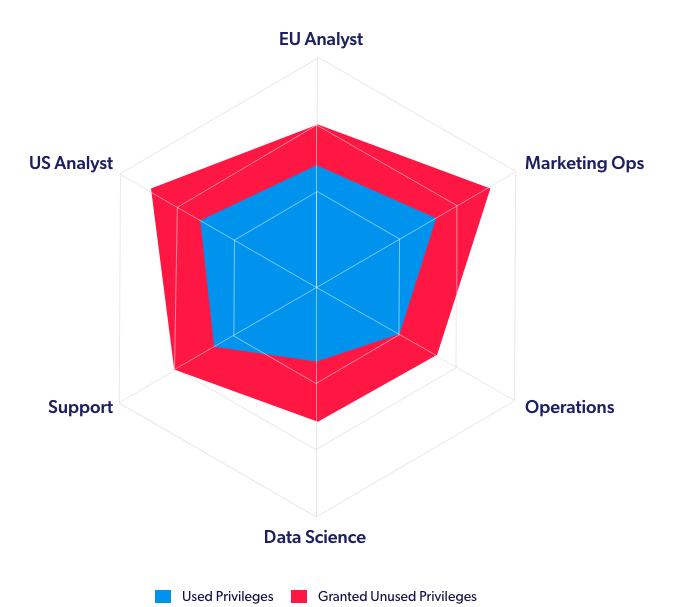 It’s very easy for granted requests to pile up when permissions are meted out in a role-specific manner instead of a user-specific manner. The reason for this is simple mathematics; it’s possible that only one or two people on a team is working on a project with that specific access need. Granting access to the entire team would therefore result in dozens of unnecessary permissions.This is often made worse by the fact that these processes are not always as documented as they should be, rendering it difficult to track the reasoning behind permission grantings down the line.

It doesn’t help that the requests almost universally move in one direction. You will rarely find a request from an individual asking for access removal. Users ask for access because they need it (or at least find the option attractive for potential uses down the line). This means that more privileges tend to be given than revoked, and users often have far more privileges than they actually need. This is problematic, as each additional privilege comes with additional risk of exposure.

Over-privileged users refers to those with more privileges than they need. This can either happen because they asked for privileges they don’t actually need, or because they “collected” and retained more and more privileges over time that are no longer relevant. Applications can also play a large role in this issue, such as when application credentials are copied to expedite the permissions granting of another application. Without focusing on the actual needs of the application in question, enterprises often end up granting them far more than they should actually have and turn them into growing risks over time.

This is why I consider over-privileged users and roles to be the silent killers of security. They become increasingly risky and it becomes a simple matter of time before they result in an unfortunate outcome. In the best case, this outcome can be a slap on the wrist after an audit. However, a data breach is far more likely.

This has become such a common issue in the world of data access for the following reasons:

Take the following example: here are some factors that contribute to over-privilege in Snowflake data warehouses:

According to the least privilege principle, users should only have access to what  they very specifically need. Anything more is considered excessive access. This principle reduces the risk posed by over-privileged users. As mentioned earlier, following through on this principle is no easy task and gets significantly harder over time.

How to Implement least privilege principles with Satori?

We identified the least privilege issue as a problem that many organizations face. We can help solve it in the following ways:

If you’re interested in learning more about how Satori can help, please feel free to reach out!